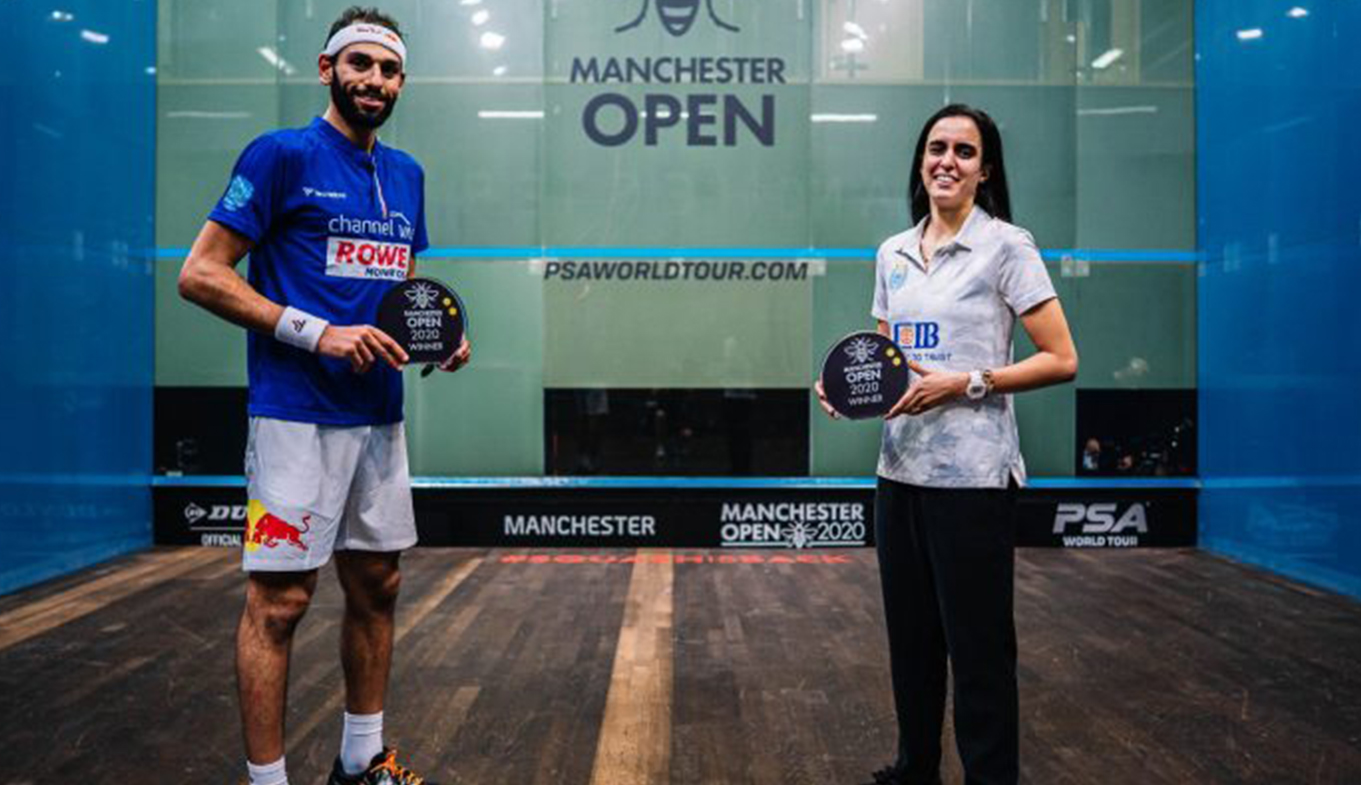 Egyptian duo Mohamed El-Shorbagy and Nour El-Tayeb have both won the first PSA World Tour event to take place following the suspension of the PSA World Tour due to COVID-19 after respective wins over Karim Abdel Gawad and Camille Serme in the Manchester Open finals.

Held at the National Squash Centre under strict COVID-19 protocols, the Manchester Open is the first PSA World Tour event to be held since March. El-Shorbagy won the men’s final PSA World Tour event before the suspension in the Canary Wharf Classic, and he picked up where he left off with a 9-11, 11-8, 11-7, 13-11 victory over Gawad to win his 42nd PSA title.

This win sees the world number one surpass French veteran Gregory Gaultier to become the sole holder of the fifth place on the all-time men’s PSA title winners list behind only Jansher Khan, Jahangir Khan, Mike Corren, and Peter Nicol.

“It has been an interesting week,” said El-Shorbagy, whose victory came in the same city he won the 2017 PSA World Championship.

“The players have had to adapt, but I am just really glad that the end result was the same for me. I wanted to win the title. I wanted to challenge myself, even with all the things we had to deal with differently. However, I think that squash was the winner, not just one player. We gave so many quality matches for the fans watching back at home.”

“When I was 10 years old, whenever I was asked what my goals were, my goal wasn’t to get to world number one because I didn’t think that was a high enough goal. My goals were always to put my name in the history books of the sport. I am only 29, and hopefully I still have more time to get higher up the ladder,” El-Shorbagy revealed to the PSA world tour official website.

The world number four had won her previous three matches against the French player coming into the fixture but was outplayed in a quick-fire opening game as Serme dominated proceedings.

El-Tayeb found her rhythm in the second game and won the next three without reply to earn her 11th PSA World Tour title and her first since February.

“It has been a while since we played anything, obviously, but it is nice to win five matches in a row,” said El-Tayeb. “I haven’t done that in so long, so it is very nice to do it in the first tournament back. It is definitely a nice confidence booster for the rest of the season. Today was not my best performance squash-wise, but I am proud of maturing a little bit, and I feel very good about today.”

“I am very happy that I have won here to give me some confidence that I can play with the top girls. I hadn’t been playing well for the last six or seven months before the lockdown, so I am happy to be playing some decent squash,” the Egyptian concluded to the PSA World Tour official website.

Both Egyptians champions took home equal prize money in excess of $11,000 each.